I get many emails asking for my opinion on the most interesting or fascinating women in crime. Surprisingly they are not all on death row. I do have a few that really intrigue me and I will share them with you in no particular order.

I have always found Sharee interesting because she fancied herslef such a seductress and she was a rather plain gal that sold MaryKay and had a fairly crappy life until she married her husband. He really saved her and gave her a great life but she wanted more. After getting her first computer and logging into some naughty adult chat rooms she found herself a poor unsuspecting sap and conned him into killing her hubby by making him believe that she was pregnant with his baby and her husband beat her until she miscaried. Sharee has since started a new relationship and a new trial. 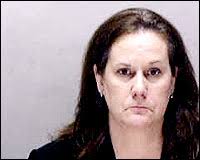 Martha is a favorite of mine because she is local to me. Her case happened in Nashville and I can vivdly remember sitting in front of the television drinking coffee one morning as it brok all over the news. She had her spanish over living in an unused bedroom closet of her home and when he fell asleep and began to snore her husband followed the sounds. When he discovered the sleeping casanova there was a terrible fight and he was strangled. They left him in the home for 16 hours before she ran screaming to the neighbor that an intruder had broke in and killed him. Martha is another homely kinda gal that just got to horned up. She was convicted of first degree murder.
at January 25, 2009