I get many, many emails each year asking if I know Cynthia Coffman.There was a book written about her called Property of the Folsom Wolf and it was actually pretty accurate from what she has told me.


We corresponded back and forth throught 2004 until 2006. We talked about the TV show Big Brother and I always got a kick out of her because she would root for the assholes. You know, the biggest dicks on the show that really made you want to slap the crap outta them.

She told me once that a job at Coyote Ugly would be just her thing and a few stories of life on the road with Greg Marlow. He had her by the balls so to speak. Abuse doesnt even cover the life she was living and to think of leaving meant to sacrifice her entire family to this man. He would kill them all if she left. He has told me this himself back in 2006 when I wrote him after Cindy pissed me off.
Cindy and I stopped talking in 2006 when she got upset that Id posted a picture shed given me online. It didnt matter to her that I am a prison activist. That I am an inmate mentor. That I give a shit.

She had her attorneys send me a letter and I havent not written her since. I was and am pissed. Regardless of the fact that she is a accomplise in several murder, torture, rape situations I reached my hand out to her for support and she slapped it away.

So, I leave her to wallow in her misery. 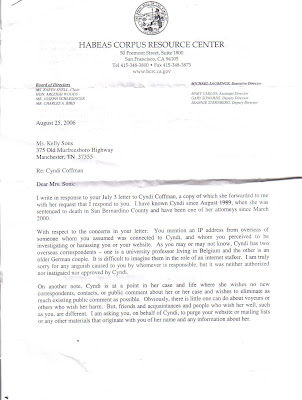