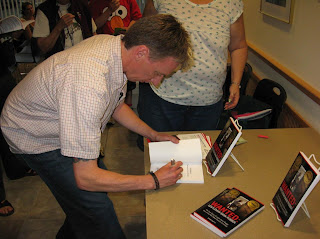 Hi Kelly!
Thank you for posting my guest blog on your site. Your topic of “Prison Reform” is a new subject to me, so I’m interested in learning more. I’m not ready to jump on a bandwagon anytime soon, but I can see evidence that the system drastically needs to be changed. I’m also ignorant on what arguments are currently happening and what progress is being done, so I’ll stay tuned to your website and learn as I go.

This is a real exciting time for me because I just finished my second manuscript just this week! We have tentatively titled the book “D.B. Tuber” Armored Car Heist: A True Story of Football, Addiction and Robbery. The story is of Anthony Curcio who was a pure athlete that became an addict (from injury) and a high-profile criminal to support his habit, but he overcame his demons to win back his family and wants to give back to his community. It's a roller coaster that exposes the prescription pill problem that affects us all. The book is due May 2013.
Anthony gets out of prison this coming April and has a 20/20 interview waiting for him stemming from an article that was published about him in October, 2010 in GQ Magazine, and were rushing to get the book in the stores before the interview.

D.B. Tuber does deal with the prison system and how my subject not only found himself at the bottom of the Hole (SHU), but it also includes details on how he was psychologically and physically abused in prison.
Now, I’m not one to blame the system. In fact, in my limited history of prisons I can easily see both sides of the argument like they are understaffed, there are way too many prisoners, that the War on Drugs has caused big-time overcrowding and the fact that they actually might be doing their best at running the prisons, but I also see that the prisons aren’t run efficiently and effectively, there is little reform and little counseling.
There are vindictive acts of malicious violence and torture that still go on behind closed doors. But, then again, these prisons house the worst people of our communities, and it probably sucks to have to be the one to punish these offenders.
I am thankful these people are off the streets and I can’t see a violent world with them as my neighbor, so I’m thankful for the prisons and what they do. I just know that there needs to be more oversight and personal responsibility in the administrative rolls of these prisons just as there are rules that govern retirement facilities – an administrator of a retirement facility is personally responsible for the well-being of their patients and can go to jail if they are abused, so the same rules should apply to prisons as well.
Violence may be the only way to communicate to some of these prisoners, but we don’t need to stoop to that level, ever. I especially don’t need to pay taxes to people who promote violence against prisoners even if they “have it coming”. This is why I need to understand more about the current rules that govern prisons before I can take a side, and now I hear that prisons are privately held. When did this happen? Apparently I’ve had my face into my new manuscript for too long and need to “pull my head out”! 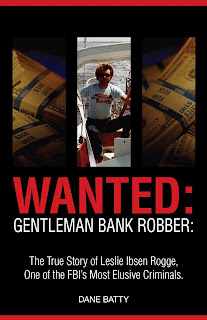 I also am the author of Wanted: Gentleman Bank Robber: The True Story of Leslie Ibsen Rogge, One of the FBI’s Most Elusive Criminals. I’m pretty new to writing books compared, especially compared to the authors on this blog tour, but I love my new job. Wanted was published in 2010 and here is a brief description:

Leslie Ibsen Rogge, number seven on the FBI’s most wanted, robbed more than 30 banks without firing a shot. In Wanted: Gentleman Bank Robber, Les details his adventures from Alaska to Antigua, the Chesapeake to Cancun. But it all came to a halt when a fourteen-year-old in Guatemala found Les on the new FBI web site forcing him to surrender and becoming the 1st Top Ten criminal caught due to the internet. Few felons have been as forthcoming about their successes, failures, robbery techniques, passion for sailing vessels... and love for his wife.

The book isn’t exactly murder. In fact it’s the opposite of murder since he didn’t hurt anyone intentionally. Les used a gun in his 30+ bank robberies, so technically they were violent crimes. He did end up getting 65 years on four convictions, so he’s doing time in the FCI Beaumont in Texas in medium security. He’s serving the time of murderers though.

The film rights for Wanted are currently being optioned by a producer, so this is real exciting. We also created a really cool video book trailer http://www.youtube.com/watch?v=rDxB76yccZY.

Thanks and thank you to Kelly for hosting this True Crime Blog Tour, and please comment if you have questions about me or my books. I’ll be monitoring this post on Sunday, July 29th, 2012. Be well!

PS - Don’t forget to stop by Goodreads and enter to win a copy of my first book Wanted: Gentleman Bank Robber – http://www.goodreads.com/giveaway/enter_choose_address/26038-wanted-gentleman-bank-robber-the-true-story-of-leslie-ibsen-rogge-one. The drawing ends on July 31st!