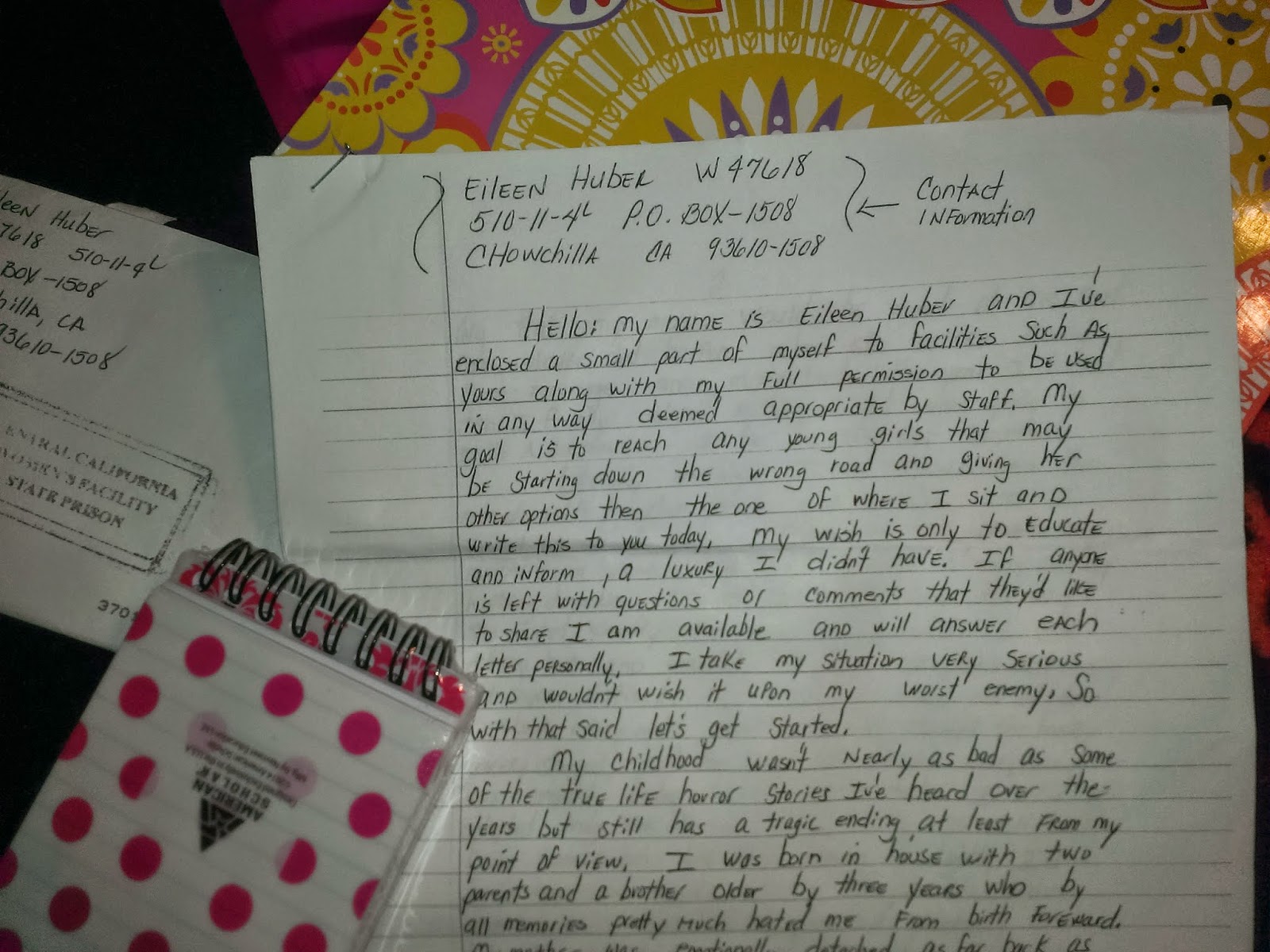 I've been receiving letters from Eileen for a few months now, since early May, I think. As inmates go, she is very literate and well spoken. She makes no excuses for her crimes aside from kicking her own ass. In this last letter she included a small booklet she'd authored full of memories and recollections and prison life pondering. It is heartfelt and poignant and stirring. So much so that I have included it in the speaking engagements, I do for schools, group homes and girls detention centers.

It tells of her childhood and while it isn't as bad as others, it's obvious where some of her issues stem. Her mother; cold and uncaring. Her father, loving but inept and subordinate. Add to them a cruel and jealous older brother and home life becomes a melting pot of anger.

Her case is even harder to understand when you consider that she never pulled a trigger, pointed a gun or issued a threat. She was simply along for the ride. Albeit a dangerous, stupid and cruel ride, but Eileen came from no background that would have taught her better.

Eileen valued honesty above everything else and still does. All her life, things changed on the spur of the moment, nothing anyone ever said proved true, nothing could be counted on. She lived her life on the hope that someday she would meet the man who was as honest as she was. Her memories recall how she has always been driven to prove she was a "down ass white bitch'  who would be a ride or die friend. It was important to her to be identified in this manner.

She was 21 when she was involved with John Lewis, who seemed to be the man she was waiting for after enduring a hardscrabble childhood. He was exciting and handsome and would do anything in the world to make sure she had everything she needed.

John later told police that he felt he was getting back at society for his perceived mistreatment when he killed four people in a series of stalking/kidnapping/murders in California strip malls in 1991. Eileen was with at the killings. She was aware of his intentions and participated just short of killing, driving cars and disposing of evidence.

She takes full responsibility for these acts now. She looks back rarely, but always with regret. Her days are filled with volunteer work, studying and work. She mentors other inmates and works toward a degree every day. He outlook is bright and shiny and all she does is done in the names of the victims. Does this help anything? No. It doesn't help the victims or the families and it can't reverse the crime, but it is a step in the right direction. It is breaking the cycle and Eileen is doing it despite all the prison system does to stop her.

If you would like a copy of Eileen's memories or would like to invite me to speak to your group of troubled girls, please email admin@thewomancondemned.com
at August 03, 2014