In 2010, when Angela Marinucci was 17 years old, she and a group of roommates tortured mentally disabled Jennifer Lee Daugherty for two days before killing her.  She was tied up, forced to consume feces, urine and detergent; beat with a towel rack, a vacuum cleaner hose, and a crutch, had her head shaved, face painted with nail polish, forced to write a fake suicide note, and then stabbed her to death.

Marinucci was only 17 at the time of the crime and unable to receive the death penalty but it does indeed, from her own confessions, seem that she was the ringleader in the gruesome death that ended with Jennifer wrapped in Christmas wrapping paper and dumped in a garbage can. 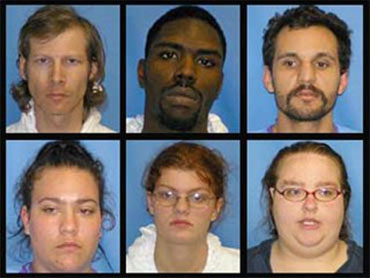 Angela Marinucci lived in the home with Jennifer, her boyfriend Ricky Smyrnes, 23, and friends Robert Loren Masters, Jr., age 36, Melvin Knight, 20, Peggy Darlene Miller, 27 and Amber Meidinger, 20. Angela felt that Jennifer and Ricky were spending too much time together and rallied her roommates to commit the horrific crimes.

Angela received life in prison but supporters have brought to light the fact that life sentences for criminals under 18 is forbidden in the state. She has appeals coming up with experts to say that she was young and is able to be rehabilitated and others to say the crime was too violent and she cannot. Time will tell.