What I didnt Put in the New True Crime Book 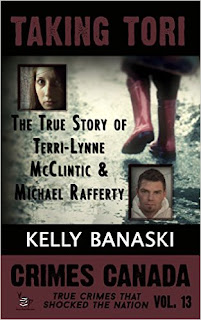 Here you are, my avid readers, what you've been asking for. Your reasons. Those dear sweet people I know in limited ways but love limitlessly. For those who stumbled upon me on accident on this day, you've found quite a thing. Something that simultaneously, intrigues, brings joy and/or pisses off the majority of its readers.

Where have I been and where did I go? A part of me broke and I had to put it back together.

You may say I deserve it, that I should be ready for the things I heard but I was not. I may have asked for the moment of hell I went through but I still did not deserve it. No matter what you hear and report on, you are never used to hearing depravity against a child or women.

I just finished writing a book called Taking Tori for Parker Vronsky Publishing about the kidnapping, torture, rape and murder of a tiny, 8-yr-old Canadian girl by Michael Rafferty and TerriLynn McClintic. I reached out to her, TerriLynn, for information on the book. I was not prepared for what or who I found.

TerriLynn is no different there. She is guilty. She admits to every last, vile act that ended in the death of Victoria Stafford. What's different is she does care. It was evident in the contact I had with her in preparation for this book and afterward. She doesn't cop deuces and she doesn't sugar coat it. That is very rare in the world of female criminals. She didn't care if I hated her. She didn't care if I was a killer groupie dying for a brush with a succubus, in search of an evil new BFF. She told me she didn't want Tori's death glorified in any way nor anything she did before, during and after the crime. She wanted me to call a spade, a spade.

Never in the decades of doing this have I come across someone like her. Her straightforward and almost deadpan retelling of the story was famous during her court appearances. At least after the first day when she seemed to be experiencing a bad case of nerves and stage fright. Her subsequent days testimony were stronger, steely reiterations. She had already put the murder and her part in it in a steel box inside her chest where her heart should be. It is locked in there and she can no longer see it or feel it or remember it. Unless she wants to.

People will call her evil and I can understand that. People will also vilify her but the truth is, we made her. People in general, Canada, in particular, let this child fester in a pile of maggots from birth. People will say her wretched childhood is no excuse for what she did to Tori and they will be right. BUT it is a reason. It is a reason for Tori's death. There is no way around the facts of science, testing and the proof of results. Terrilynn had no way of knowing what truly normal was. She had never experienced it. That type of person is dangerous in any society on earth.

But go ahead, sit on the couch with your laptop and call her names and spew hateful words. Were you the same people that tortured Tori's poor mother Tara McDonald? As if she hadn't been put through enough vilification of her own while her daughter was missing, it continued even when the real killers were caught. Who you really are is the person who made TerriLynn what she was and then set her on the road to murder.

If your not those people, prove it. Make a move. However small, change this bullshit in your own way and it will change the world.