I was in the garden box this morning, quite pleased with myself for the ginormous Serano Pepper I grew (read: all by myself) with my Kindle Fire tablet beside me. I usually listen to classical or some other calming music when I'm out in the yard. I feel like it adds to my outdoor experience at times. It helps keep my mind in the moment and not wandering back to work even though my body is active and outdoors. Today I had the local news playing in the background when I heard the newscaster say something about a man and woman involved in the murder of another Nashville couple. Wow. One couple killed another couple. Wow, weird. Why? How? And I was off.....

Here we have one Whitney Gray, who, along with her boyfriend Brandon Griswold, killed Preston Claybrooks and Alexandria Grubbs last September. Their battered bodies were found in unit A-3, shoved in a closet, at the Garden Howe Apartments. According to Nashville Police Detective Mike Roland, who testified in court, Gray and Griswold owed the other couple almost $700 for heroin. They didn't have the money to pay them so the two formulated a plan to murder them and hide the bodies.
All four people lived together in East Nashville in Garden Howe Apartments. Police say at approximately 10:15 a.m. on Sept. 21 the offending couple entered the victim couples bedroom as they slept. They beat them immobile and then one of them slit their throats. They then wrapped them like mummies in their sheets and blankets and put them into the closet.  They didn't think things through because they were the leaseholders on the apartment. It wasn't long before Claybrooks mom reported him missing and  a few days later she called again to say the apartment was obviously stinking of death. The bodies were quickly discovered. Police were instantly searching for the other couple. They were located the following Monday afternoon after the killing with a homeless man near the Radnor Yard railroad depot.

Gray and Griswold were each indicted on two counts of first-degree murder, two counts of felony murder, two counts of abuse of a corpse, tampering with evidence and theft over $500. Wow. My fiance and I go to dinner in Nashville A LOT. There isn't much to do in Small Town USA where we live about 60 miles south of the city. So, when we get out we like to make a big production out of it. We were there in April for the Country Living Fair. These people could have been right next to us on any given trip. Creepy.

And here's the Serrano pepper. I grew it. All by myself. 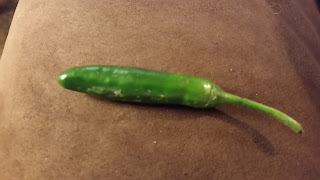