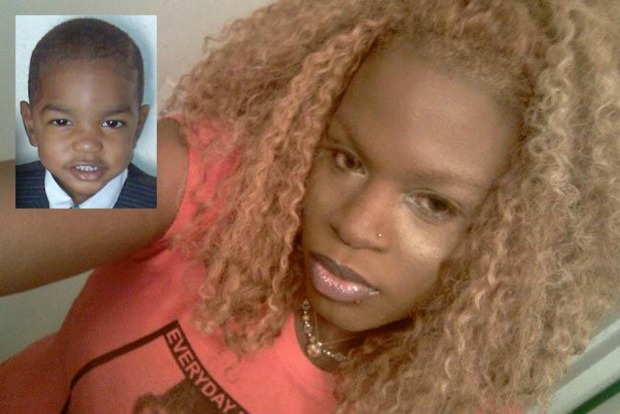 Kryzie King, a 29-year-old, transgender woman from Hell's Kitchen, tortured and starved her boyfriends 4-year-old son to death in 2013. She was angry she'd been left with the boy over the long Christmas holiday. She had plans to go to Jamaica and now those plans were ruined.

Little Myls Dobson had been removed from the custody of his mother, Ashlee Dobson, in 2012 for charges of neglect and abuse and had been living with his father, Okee Wade, a convicted rapist. Wade had left King in charge of Myls went he left the luxury high rise but was arrested for failure to appear in court on fraud charges and jailed unexpectedly, leaving King to care for the boy.

Over the course of 29 days she tortured him until he died on January 7th. She beat and burned him. She put him outside in several feet of snow for hours undressed. She tied him up and gagged him. Never once in the entire time did she feed him. He died of starvation and King called the police.

Wade swears from jail that he doesn't know King nor have a relationship with her but it is unclear how the child was in her custody then. King first described how much she loved the boy and her big plans for Christmas including a $900 gaming console and Christmas Tree. But then went on to describe watching him die as he sat slumped in the bath tub. He had lost 25 lbs.
It began shortly after Wade was arrested and the boy asked to go to McDonalds. King lost her temper and beat the boy, badly injuring him. She said she knew that she would be in trouble if she sought help for him.

King told police that on December 29 she removed a hot rack from an oven with a glove and allegedly placed it against the boy's right leg, leaving linear burn marks, the complaint said. The next day, she told police, she allegedly struck him about his body five to six times with a belt, leaving bruises and scars.

The complaint said King admitted that from December 30 to January 4 she allegedly tied the boy's wrists and feet together with shoe laces and gagged him with a piece of cloth. She told police that resulted in scaring on his wrists and ankles. On the day she freed him, the complaint said, King allegedly beat him twelve to thirteen times with a belt.

On the day she was sentenced to 22 years to life, she asked the judge to order the prison not to touch her hair. Her lawyer explained that her hair was important to her identity as a transgender woman. She also asked to be put in a special prison for transgender women and isolated in fear for her life.
at September 01, 2017