More than five years ago, I threw up this little ebook about how important writing to some of these inmates can be. Many people scoff at the rehabilitative properties of writing, but its been proven again and again. Writing to a person on death row in a positive manner can absolutely roll down hill and change the life of someone who is getting back out on the street. Maybe in your neighborhood.
It is free today. Check it out. Leave me a review, if you liked it :) 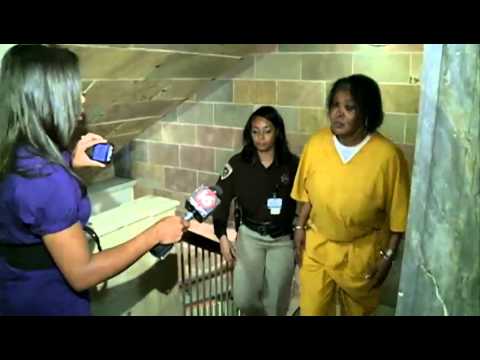 Tracey Lynn Garner, the transgender woman who gave DIY butt injections in her basement which ended up killing a woman has died in prison. We first discussed Tracey in 2014 when she wa sentenced for her role in the death of Karima Gordon.

Tracy Lynn Garner, 54, was found guilty of depraved-heart murder and conspiracy to commit wire fraud in the 2012 death of Karima Gordon, 37, whom she had given illegal silicone butt injections too. Garner is not a nurse, but an interior designer who apparently gives butt injections on the side.Prosecutors said Gordon was referred to Garner by Natasha Stewart, an adult entertainer known as Pebbelz Da Model. Stewart was convicted of manslaughter in Garner's death and received a seven-year sentence.

Authorities initially identified Garner as a man, Morris Garner, after the arrest. Her attorney subsequently said Garner was born male and had sex reassignment surgery.

Garner was taken from Central Mississippi Correctional Facility to a hospital in Jackson, where she was pronounced dead Sunday morning. The Department of Corrections did not elaborate on the circumstances surrounding the inmate's death.
at January 16, 2018 No comments:

Kira Kastenhuber killed her friend, Desirae Withey, a single mother of two small girls. Although you could hardly call the two women friends by the time she killed her. Maybe never. Not really close friends, anyway. They both worked at Creative Food Ingredient, a baked ingredient company in Perry, New York. A lot of locals worked there are people actually move to that town in order to work there.  Not only did Kira work there but so did her ex-husband and her ex-boyfriend.

Desirae first lived with her parents when she got the job. She moved in with her sister in Perry a short time later and then into an apartment of her own at 84 Borden Avenue with her two Zoe, 2, and Sophie, 6. Her friends called her Desi and she was a budding artist with dreams of art school.

Desi knew Kira and had no problems with her. Even when she started to date one of Kira's ex-boyfriends, she never tried to cause an issue over it. Kira, on the other hand, told everyone she did not mind but it was obvious she did. She obsessed over it, asking fellow coworkers for gossip. Things steadily got worse. Kira loudly confronted Desi at the company Christmas party in December and had to be escorted from the property. She took to showing up at Desi's house saying they 'needed to talk' often, just opening the door and walking in. Still Desi tried to keep the peace.


Eventually, on February 6th 2015, Kira broke into Desi's apartment through a window while she and the girls slept. Desi's sister had left around midnight. Young, innocent Sophie woke up around 7 a.m. to find the cold, bloody body of her mother and ran to alert the neighbors.

Police have been very tight lipped about the details of this case, saying only that they were bizarre and gruesome. From evidence, we know Kira tortured Desi. She stabbed her in the leg and chest.
She then asphyxiated her to death.

An initial view of Desi by police revealed marks on her neck and wounds to her right wrist. An autopsy revealed deep cuts inside her vagina, indicating the possibility that a sharp object was used to rape her. Bruises were found “bodywide” during an autopsy, which police and coroners testified show Desi was strangled.

In preparation for the murder, Kira made an extensive list with entries such as:


She remembered to clip her dead friend's fingernails but left the clippings at the scene. She went home to her mom's house. The next morning, she overdosed and when the cops came in response to her mom's 911 call, she handed them a confession/suicide note. She was taken to the hospital and arrested upon her release.


“To whom it may concern,” the note allegedly written by Kira Kastenhuber begins. “This is my confession. I did it. I did it all with no help. I just became so enraged I couldn’t help myself so I killed her.”

She was sentenced to 15 years to life with a plea deal. Much controversy is surrounding this case because so many people feel she may get paroled even though the injuries she inflicted were horrific. A lot of people feel she is really remorseful and the circumstances surrounding the crime will not occur again. I have a hard time believing that. I know women who flip out like this when a man doesn't choose them. It is likely to happen again, as long as there is a man interested in her.

How to Use Your True Crime Obsession to Make Money

We are crazy addicted to true crime. While we have been into checking out the misfortune of others since the dawn of time, we now demand television channels, books, podcasts, and live streaming access to all things crime, criminal and (hopefully) ghastly. And documentaries. Do not forget the documentaries. AAllllll the documentaries.

Wouldn’t it be great if we could hang out our signs as armchair investigators and start raking in the cash? We can, Detective. Oh yes, we can. Here’s how:

I know you have heard it before. Start a blog about your life’s passion. Make a living from your living room. Except it isn’t that easy. There is a whole lot that goes into a blog, including finding the perfect niche to blog about. Starting a true crime blog means you already have a popular niche. Then just customize it. Find the perfect niche. Niche it good. Get really nichey. Are you a mom of 10 foster kids? Bam! Now you’re the True Crime Foster Mom solving crimes and blending families all over town. The more creative you can be, the better. True crime podcasts are everywhere these days. Every Tom, Dick and Sally is spilling their truth all over the place so you gotta have a great idea. Vlog about famous local crime scenes. Carry your cell phone camera everywhere and go from the cuff. Start local and build a rep in your town. Start from there.
The best cheap and fast book I have found about podcasting is Start a Podcast. You can get it free if you have Kindle Unlimited. It is .99 cents if not.

If you have knowledge of a great case, write a book about it. Even if you can’t get it traditionally published, there are a million other options these days and they are all making money. Contact a true crime author you love (ahem… my email is admin@thewomancondemned.com) and get their help. Self-publish paperbacks and market them yourself, or publish e-books on Kindle. Be prepared to invest some serious time and energy into this one. There are untraditional options though, if your pressed for time. Write up short little article type books, call them 10 Second Crimes and rock it out. I read How to Write and Sell True Crime a billion years ago and it helped me tremendously. It is dated but very useful still. Anyone with an interest in true crime who is crafty can make a buck. I am often invited to conferences and expos. I set up a booth with my books and meet readers. Sometimes I am invited to hold panel discussions. I never fail to be amazed by all the amazing, creative vendors at these things. People make serial killer jewelry, bookmarks, and Tshirts. I’ve seen fake fingernails with Ted Bundy and Richard Ramirez on them. I have sat next to a vendor who made lingerie donned with flashy images of crime scenes. Think it up and make it. Someone will buy it.

Make Your Own TV Channel
Go through something like Roku and set up a channel with your own content. http://roku.lightcast.com/ Its free to sign up as long as you have the content. roku helps you advertise and market. Anyone with a Roku box and enjoy the many hard hours of ID Channel knowledge gathering you have done.

There are a ton more things you could do. It all depends on your talents and motivation. When I started this journey, I was in a horrible marriage. I truly thought I would die either at his hand or at my own from pure misery. My interest in crime and desire to write about it had been life-long and I reached out to inmates in an obvious attempt to find someone – anyone- in worse shape than me in life. It could always be worse. Use your own life experiences to spur you on. Use what you know to make you grow.

If you have any questions or need some one-on-one attention to get started become a patreon of Woman Condemned.
Do you know of another way this grisley obsession can help make ends meet? Let me know. admin@thewomancondemned.com
at January 04, 2018 No comments: