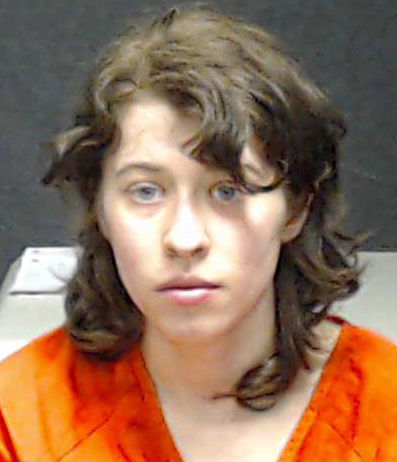 What the holy fuck went on in this case? There is so much going on I cant figure it all out!The Stanley woman who admitted to stabbing an Eau Claire man in rural Dunn County has appeared before Judge James Peterson.

Citing issues with the criminal complaint, Nelson requested the criminal complaint be sealed and a certain paragraph be struck. However, Assistant Attorney General Richard Dufour — who appeared via telephone — noted that since McCandless had signed a waiver of medical records, the information in the complaint should not be removed.

In addition to continuing the $250,000 cash bond on which McCandless is being held, Peterson ruled that the complaint would not be sealed and set a preliminary hearing for April 25.

According to the criminal complaint:

Around 4:15 p.m. on March 22, the Dunn County Sheriff’s Office received a call from Don A. Sipple that a young woman had arrived on foot at his residence in the E7600 block of 40th Avenue in the town of Spring Brook. Sipple reported that the woman was bloody, barefoot and muddy.

A deputy responded with a Wisconsin state trooper and the woman was later identified as McCandless. The deputy found her hair to be disheveled and noted blood around her mouth, on her knuckles, left arm and upper right thigh visible through a hole in her pants. Although she appeared to be very upset and crying, the deputy said he didn’t see any visible tears.

When asked by the trooper, McCandless could not provide an address or her name, but gave the name of Jason Mengle, of Eau Claire, as someone they could contact on her behalf.

Followed by the Dunn County deputy, McCandless was taken by ambulance to Mayo Clinic Health System in Eau Claire. At the hospital, he could see the word “Boy” cut into her left arm and also learned that McCandless had changed her name from Monica Karlen in 2015.

The doctor who examined McCandless on March 22 reported that the angle of the wounds indicate that they could be self-inflicted and the letters carved in her left arm were oriented for her to look at. McCandless admitted to medical staff that she has self-harmed in the past.

The Dunn County deputy reached out to the Eau Claire Police Department for help in finding Mengle. An officer said ECPD earlier the same day, around 12:30 p.m., police contact had been made with McCandless, Mengle and Woodwoth at Woodworth’s home in Eau Claire.

Asked what happened that day, McCandless admitted to being at Woodworth’s home and left to go to Owen Park in the city where she claimed that Woodworth allegedly attacked her and cut “boy” into her arm. For jurisdiction reasons, the investigation was turned over to the ECPD officer.

In an initial review of cameras in the area, the officer could find no evidence of McCandless’s car coming or going from the park, noting that the alleged assault took place near a busy intersection with lots of vehicle and pedestrian traffic.

At that point, an ECPD investigator took over the investigation and observed that a significant amount of time had taken place between the time McCandless was found at Sipple’s residence and the last time she was seen with Woodworth. Concerned for his safety, an unsuccessful search for Woodworth was initiated in the city and county of Eau Claire.

Around 3 p.m. on March 23, the investigators went to Sipple’s residence to interview him a second time. As they drove, they noticed a mud-covered road leading off to the south of 430th Avenue, about a 40-acre parcel east of Sipple’s home.

One of the investigators returned to the dirt road and found a single set of bare footprints in the mud that lacked the ridge detail found in a shoe pattern. He also observed tire tracks leading up the muddy road.

Walking up the side of the road, the detectives located a 2003 Chevy Impala with license plates that later confirmed it as McCandless’s vehicle. The driver’s side rear door was standing open and clothing could be seen lying on the ground outside.

The detectives could see what appeared to be the head and upper body of a person lying partly outside the door. With blood around the car and no signs of life, it was clear the person was deceased. Once they confirmed there were no other victims on the scene, the detectives backed out of the area to preserve the crime scene and called the Dunn County Sheriff’s Office to complete the investigation.

Identifed as Woodworth, the body was taken to the Ramsey County (Minnesota) Medical Examiner’s Office on March 24 for an autopsy. According to the preliminary report, the cause of death was multiple sharp force injuries — 16 in all — and that the manner of death was homicide.

Interviewed by investigators on March 24, McCandless told them she drove to Woodworth’s house to return some things to him. She said they wanted to talk with each other and decided to go to a public place. Initially, she was in the driver’s seat with Woodworth in the passenger’s seat, but later became anxious and had Woodworth drive.

McCandless said they ended up on a dirt road on 430th Avenue in Spring Brook in Dunn County where they got stuck in the mud. She alleged that Woodworth attacked her in the vehicle and carved the word into her arm. Grabbing the blade side of the knife, she said she was able to take the blade from Woodworth and admitted to stabbing him “anywhere and everywhere.”

McCandless said she thinks she stabbed Woodworth in the genitalia area by his leg, the stomach, neck, back by the ribs and side of his head. She did not respond when asked how the word “Boy” got put onto her arm, but later admitted she put it there after she stabbed Woodworth.

McCandless remains in custody in the Dunn County Jail.