Margaret Kinney, along with her boyfriend, Michael Stumph, meticulously planned and executed the murder of 89-year-old veteran Otto Stewart in November of 2016. They were homeless when the kindly old man befriended them. They lived with him for a while and took advantage of his generosity. Even after they left his home, he continued to loan them money and help them exist. Eventually, however, he grew tired of the situation and told them both to get jobs and pay him back. 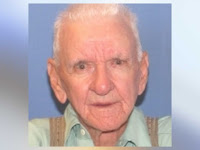 According to Margaret, this is when they began to think about killing him. He was about to die anyway, right? Why did he need all that stuff? Why did he need paid back when he would be dead before he could spend it?

Kinney told police she stabbed Stewart with a large kitchen knife. Prosecutors said a pillow also was used to suffocate Stewart, and a cord wrapped around his neck had been tightened like a tourniquet.The couple took his cash, valuables, and left in his car.  It was over a month before his body was found.

They were arrested in Kentucky, near Lexington, in late December of 2016. Prosecutors first wanted the death penalty but did settle for life without parole.
at September 18, 2018