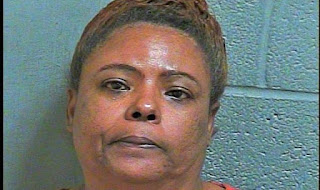 Connie Bruner and Ashley McGough were at their apartment complex mailboxes when a fight broke out. Police arrived to the Oklahoma City location of  SW 29th and Walker around 4 p.m. Ashley, 26-years-old, had already been stabbed. She died in the hospital a short time later.

Witnesses reported the fight started over the mailboxes and quickly escalated to violence.

Ashley turned to leave when Connie, 48, stabbed her in the back.
Connie admitted to stabbing Ashley and was charged with first degree homicide Thursday. Then she clammed up. There is very little information out yet about this case or what started the argument.