Stephany was an Army wife. We have all been told how hard that can be. They are home alone for months or years at a time to take care of the family without aid of a spouse. She is charged with killing her two daughters. One in 2015 and another in 2017. Her case made the news when cops found a search for how to get away with murder on her computer an hour before calling 911 for the death of her second child. She also searched for best ways to suffocate and other nefarious topics.
She got away with the first murder. Two years later she killed another one. I guess feeling brave since she'd done so well with the first. 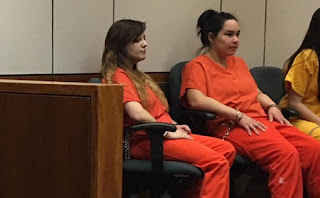 On Nov. 20, 2017, Stephany LaFountain called authorities for help at her home on the Fort Wainwright military base in Fairbanks, Alaska, according to police reports. Her 13-month-old had stopped breathing. She called her in-laws, telling them she'd been trying CPR. She called her husband, who was away on deployment. He rushed home while their baby girl was flown to the hospital. She died four days later. As police investigated the crime scene and found her morbid search history, they reopened her first child's death.


LaFountain, 23, who has changed back to her maiden name, Bilecki, was indicted Aug. 29, 2018 in the deaths of her two infant daughters. She has been charged with murder in the first and second degree in both cases. She was arrested in 2017 and was held at Fairbanks Correctional Center on $2 million bail. The maximum sentence for first-degree murder in Alaska is 99 years in prison and a fine of up to $500,000.

When her 4-month-old died Sept. 15, 2015, police thought it was an accident, an isolated tragedy. As she did with the 13-month-old, two years later, Stephany LaFountain called emergency 911 responders saying the baby had stopped breathing. She called family members just as she did later as well. The infant, whose father was from a previous relationship, died later that day. The cause of death was undetermined, according to police reports, but the body showed signs of suffocation.

I did a little checking around at the request of our Patreon subscriber Neva, and found out from a colleague at the News Miner Newspaper that Stephany plead not guilty in September of 2018. This is also when her name was officially changed back to her maiden name. I had to search court records for Bilecki because Stephany LaFountain disappeared after September 2018.

Stephany LaFountain’s children had two different fathers. Members of both families were present at the arraignment and left the courtroom immediately after her hearing was concluded. She does not have any other children.

LaFountain was scheduled for an omnibus hearing at 2:30 p.m. Sept. 27 and a calendar call Oct. 5. Her trial was scheduled to begin Oct. 15 but was set off for a later date, as is common in homicides and other serious felony cases.

At her omnibus hearing at the Rabinowitz Courthouse in Sept 2017, she blurted out

“Your honor, I just told my lawyer that I did not want to waive my right to a speedy trial, And I don’t want my trial in December!”


According to Alaska’s criminal procedure Rule 45, defendants must be brought to trial within 120 days of the time they are served with charging documents or indictments. Bilecki/LaFountain,  was indicted Aug. 30 on two counts of first-degree murder and four counts of second-degree murder for the 2015 death of her 4-month-old and the 2017 death of her 13-month-old. She was arraigned Sept. 5 in Fairbanks Superior Court and her trial date was set for the week of Oct. 15. An omnibus hearing was held Thursday and a calendar call was scheduled for Oct. 5.

Omnibus hearings are held so the judge can determine whether any motions will be filed, whether both sides have access to important evidence and whether the trial is likely to start on the scheduled date. Trial dates are commonly delayed for a variety of reasons, including pretrial motions, requests for continuance, competency hearings or the availability of witnesses.

At her omnibus hearing, Bilecki’s public defender, Justin Racette, asked Superior Court Judge Michael McConahy to reschedule the omnibus hearing for Dec. 13 to allow him time to get up to speed on the case.

“I just received a pretty large volume of evidence on a hard drive just this last week. I’ve only begun to scratch the surface in going through it,” Racette said. Assistant District Attorney Elizabeth Crail agreed that the amount of evidence, known as discovery, was “voluminous.”

“I will note that he should have all, or nearly all, of what we have at this point, but the investigation proceeds. So if we get any additional information we’ll be passing that on,” Crail said.
McConahy, noting “the nature of the case and the representation of the volume of discovery,” granted Racette’s request and rescheduled the trial for the week of Dec. 31. 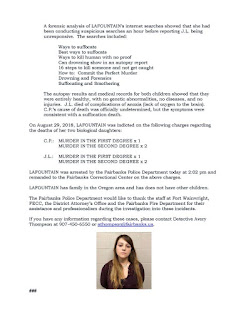 At that point Bilecki, clad in an orange prison uniform and handcuffed to two other female defendants, loudly voiced her objection. McConahy calmly asked Bilecki whether she knew her Rule 45 dates, to which she replied that she “wasn’t sure.”

McConahy told Bilecki they could “address any speedy trial issues” at her Oct. 5 calendar call.
“I think we’re well within it at this point. If I’m wrong, just bring it up,” McConahy said.

It looks like she would like to get her trial underway ASAP, as would most, but she is pleading not guilt. I assume it will be some sort of post pardum defense but police haven't even issued any thoughts on a  motive yet, so I just don't know.

Much of this was pulled from info from News Miner

A great big HUG and a very heartfelt thank you to Neva and Mike for supporting The Woman Condemned.
at April 18, 2019