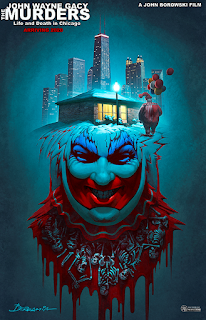 (Waterfront Productions) – Chicago native filmmaker, John Borowski, (H.H. Holmes: America’s First Serial Killer) has just released the poster art for his next feature documentary film titled The John Wayne Gacy Murders: Life and Death in Chicago.
“Artist Claudio Bergamin vastly exceeded my expectations for the artwork. My jaw dropped at each step of the process as Claudio unveiled his designs for the poster to me.” Borowski stated. When attending a recent Horror Hound Convention in Indianapolis, Indiana, Borowski met Bergamin and felt his style would fit perfectly for the Gacy film poster. “I always appreciated classic movie poster artwork and Claudio’s work reminded me of the beautiful classic film posters created by artists.” Borowski stated.
An online fundraiser is currently running throughout the duration of the production of the film and has successfully met each month’s goal so far: gofundme/borowskifilms.
“Claudio is a classy guy and a true professional along every step of the way. He was a pure pleasure to collaborate with.” Borowski stated.