Corrie Denise Arriaga Tortured a Woman to Death for a Decade

A 44-year-old Seaside woman, Corrie Denise Arriaga, was sentenced Friday 12/13/19  to a life sentence without the possibility of parole for the first-degree murder of a dependent adult in 2017.

The guilty plea by Arriaga included an admission that the murder was "intentional and involved the infliction of torture," according to the District Attorney's Office, a special circumstance that factored into the sentence.

The victim, 33-year-old Courtney Ann Turney, moved to Monterey County from Oklahoma in 2008. Turney attended special education classes due to complications during her birth.

Investigators found that Arriaga physically abused and imprisoned Turney in their apartment, starved her and made her perform physical labor. Arriaga also embezzled large amounts of money that Turney received from the Comanche Nation.

Evidence introduced at the trial showed that Turney was held in Arriaga's apartment up until her death on Aug. 4, 2017. Turney's body was discovered the next day.

Examination showed that Turney, who weighed about 230 pounds when she came to California, weighed 54 pounds at the time of her death. She had a fractured skull, rib fractures, pressure ulcers and "bruising and swelling consistent with blunt force trauma," the prosecution said.

Her boyfriend, 30-year-old Manuel Jesus Lopez Jarquin of Seaside separately pleaded guilty to abuse of a dependent adult causing great bodily injury and accessory after the fact in the murder. His case is pending. 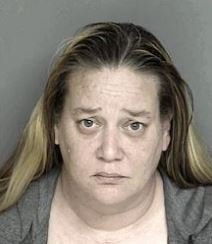