This isn't a new crime, at least for women, but it is still shocking every time I hear it. Kathy Michelle Coy, of Morgantown, Kentucky, cut her friend, 21-year-old Jamie Stice's baby out of her, killing her in the process, in 2012. She very easily could have gotten the death penalty, but she took a plea and received life without parole.

Before we continue, I'd like to thank our newest Patron, Colleen. I hope you enjoy the exclusive content you find there as well as your true crime gift bag that will go out at the end of the month. A short reminder to the rest of our true crime aficionados; the true crime package will only be going out at the $7.50 level until the end of December 2019. Act fast to receive one of the three remaining pieces of Charles Manson's hair, actual inmate letters, Green River Killer artifacts, and many other unique items representing this countries crime history. Each bag has randomly chosen pieces.

The baby boy Kathy extracted, named Isaiah, survived and lives with his father.

Just like so many other cases, Kathy met Jamie on Facebook. She lured her out of her home one April morning on the pretense of baby supply shopping. Once she had her away from the world, she subdued her with a stun gun, cut her wrists and stabbed her. She removed the baby, placenta, uterus, and ovaries.

Only moments after the murder, Kathy showed up at her friend Ashley Reeder's house. She was naked from the waist down in her car, sitting on the placenta, uterus, and ovaries, and holding the baby boy. She told her friend that she had just given birth. The friend cleaned the baby and called an ambulance. She also took some cell phone photos of the baby, feeling a bit uneasy about the circumstances.

Of course, when she got to the hospital they found she had not given birth. Why don't these broads think of crap like that?  Maybe that is a sign she is mentally impaired, I don't know. I do know that it is common knowledge that this type of crime will be immediately detected.

At any rate, Kathy eventually told police she bought the baby and organs for $550. They searched her computer and found connections with two local pregnant women. One they found alive and well. The other, Jamie Stice, was missing.

Kathy eventually confessed and told police where they could find Jamie's mutilated body in a nearby wooded area.

Again, just like so many of these cases, Kathy had faked pregnancies before. Stole sonograms and bought baby clothes for a nonexistent baby. It was revealed in court that Kathy had asked one of her two children, a teen boy, to help her commit murder. When he refused, she claimed to be kidding.
The doctors who examined her in jail have deemed her mentally incompetent. This went a long way in keeping her off death row. 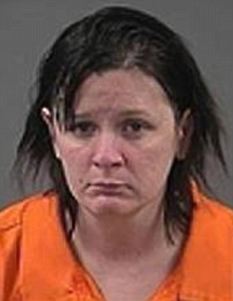