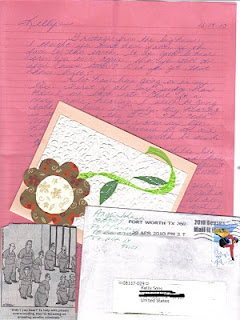 Greetings from the Big House!
That is how Angela Johnson’s most recent letter began.

The Big House, up the river and The last Mile were all coined at Sing Sing prison in New York. While Angela is far from Sing Sing she is still an anomaly. She is the first (since 1953) and one of only two women who are FEDERAL death row inmates.

I have been writing to her for about 4 years but she and I have a sporadic relationship. She is anomaly also because she is the only woman who I write who is constantly upbeat, constantly cracking jokes and constantly striving to make her situation easier for other people.

Her crime was involvement in the deaths of 5 people and impeding a meth investigation in Iowa which has no death sentence. (14 other states also do not have a capital punishment law). She has not spoken to me about her case but I am critical of her involvement. Even the presiding judge stated "I am troubled by the lack of certainty in the record concerning the precise involvement of Angela Johnson in these crimes" but the jury gave her a death sentence and under federal law, the judge is bound by the jury's verdict.

Supposedly, Angela had broken up with a fella and was dating Dustin Honken who was a local meth dealer. The ex narced on the meth dealer and together Honken and Angela exacted revenge. Angela posed as a lost salesperson and gained entry to the victims house where Honken videoed a forced confession from the victim in order to clear himself of impending charges. There were also two children present when this occurred and they were also killed. Angela also is said to have lured the ex to a remote location where Honken shot him.

How much of this is true and how much is media embellishment I do not know. I could ask her but I doubt she would talk about it since in this latest letter she say’s “my judge has ruled me back into court for a very “rare” hearing. I’ll be going back to Iowa in July. The hearing is the 12th and it could very well be what saves my life.”
WOW. I hope so. But she has always proclaimed her innocence. Honken was a malicious abusive scary guy that carted Angela around under veiled threats and some not so veiled abuse. Who is to say what she went through? She was only present at the murders. She did none of the killing but in America if you are present at a murder you are as guilty as the killer.

That goes for people who have been beaten into submission as well apparently.

I love Angela’s letter. They always come with a comic or something clipped from a newspaper, a handmade card and often the envelope is handmade as well. So pretty and sparkly. She also talks about the Prison Biggest Loser contest she is in where she has recently lost 20 lbs due to her grueling work out schedule. I wish I had her stamina.
at May 07, 2010