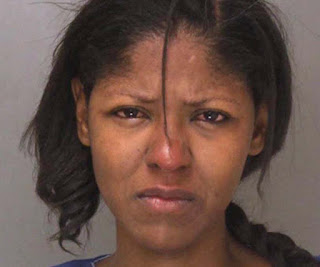 We aren't being told exactly what happened yet but we do know that police were called to her home at 2 a.m. to find Billy Brewster crumpled on the front lawn, bleeding profusely from his punctured heart wounds.

The couple was scheduled to be married at 10 am and family had steadily been arriving all weekend. They heard the ruckus and rushed into the living room to take the knife feom Na Cola but not before she stabbed him.

She saw the judge this morning but was confused and disbelieving when the judge told her that her fiance was dead. She asked for them to "Check again." and said that it was an accident.
at September 12, 2012