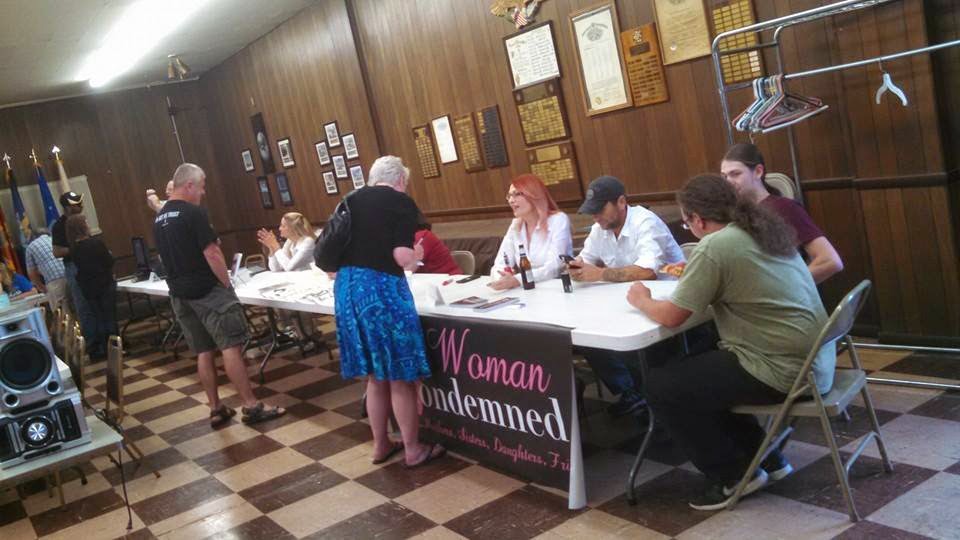 I was invited as a special guest to the Dark History Convention in Rantoul, Illinois last weekend. So, my boyfriend Steven and I, along with my son Lucky and his lifelong bestie, Dillon, came along for the ride. Rantoul is 8 hours from my home in Middle Tennessee so we headed out very early. I slept a lot and read a lot and prepared for my reader’s questions.

The hotel would not let us check in until 3 and the event began at 6 so I was pressed for time to get something in my stomach and become presentable after an 8 hour drive. We tried to eat at Olive Garden but it was so packed I wondered if it was the only restaurant in town. A quick Google search pointed out a nearby TGI Friday’s so off we went. I sipped through two glasses of Chardonnay while I ate my pasta and my nerves eased up just a little.

The hotel was in Champaign, Illinois, about 30 minutes from the venue, a V.F.W. lounge. I set up my table next to Richard O. Jones, who writes and sells “Two Dollar Terrors” in pamphlet form. Next to him was Maureen Hughes, author of The Countess and the Mob, Sins of the South and An Angry Fire Still Burns. On the opposite side of the room was Joe Hiles of Serial Killer Central and Matthew Aaron of The Last Dime Museum; both of these guys were featured in the John Borowski film, Serial Killer Culture, which was viewed at the convention. Next to them were Disney animator, Philo Barnhart and comic book creator, Charles D. Moisant.

I was just thrilled to finally set eyes on Joe Hiles. We have talked for years and I was very much looking forward to seeing him. Matthew Aaron was another big thrill for me, but I didn't get a chance to chat with him. These guys are pioneers in the True Crime sub-movement and those people buy books! Joe was so nice and so interesting and everything I knew he'd be.

I took books from my new publisher, RJ Parker Publishing, and some rack cards about this blog and the inmate services I provide. Most questions I fielded were about Eileen Huber and Richard Ramirez, however. Who knew? Judging from blog stats most people come here in search of information on Brenda Andrew. Some questions were about the new book from RJ Parker Publishing, Serail Killer Anthology Vol2., containing my chapter on Canadian serial killer, David Russell Williams, releasing in December.

It was a great time, really. The public was wonderful and the host was gracious.
at October 05, 2014